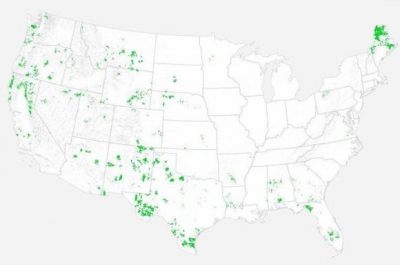 The 100 largest private landowners in the US own a combined 40 million acres, an area roughly the size of Florida.  The top ten landowning families control an area roughly equivalent in size to the state of West Virginia.

In a recent story, Bloomberg matches some of the largest landowning families with some of their flagship parcels of land.

According to BBG, the top 100 private landowners own property in 39 states. Their parcels suit a number of purposes, from investment, conservation, tax benefits or simply the bragging rights that come with owning large chunks of the US.

Media moguls John Malone and Ted Turner own more than 4 million acres in 12 states, much of it ranch-land out west. Turner owns a herd of 51,000 bison, the largest privately owned bison herd in the world.

A popular category among the largest property owners is ranch land, which represents 58% of the property owned by the top 100, or more than 23 million acres, mostly concentrated near the Texas-Mexico border.

King Ranch, a south Texas institution founded in 1835, is bigger than Rhode Island. More than 400 miles to the north is the country’s largest ranch behind a single continuous fence, belonging to LA Rams co-owner Stan Kroenke.

Overview: We had a solid round of domestic economic data with very strong ISM Services and a rock-solid jobs report on Friday.  The Fed left the door open for a rate decrease in September but appears to be in the 1/4 point camp rather than the 1/2 point camp.  Their commentary was actually fairly positive on our economy.

Jobs, Jobs, Jobs: We had Big Jobs Friday!  You can read the official BLS report here.
Lets look at the Tale of the Tape:

The Talking Fed: Fed Chair Jerome Powell said that “Political factors play absolutely no role in our process, and my colleagues and I would not tolerate any attempt to include them in our decision-making or our discussions,” and "we are going to act as appropriate to sustain the expansion.” He also said “Our obligation is to use our tools to support the economy, and that’s what we’ll continue to do,” and that "we are clearly at a time where there is a range of views”

The Fed's Beige Book hit Wednesday. You can read their official release HERE.

Here are some key takeaways:

Employment grew at a modest pace, on par with the previous reporting period.

Services: Representing more than 2/3 of our economic output, the August ISM Non-Manufacturing Index hit 56.4 vs est of 54.0