The Safest Affordable Metro Areas are........ 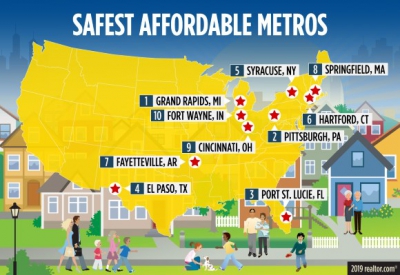 The Safest Affordable Metro Areas are........

Looking to find a safe place to live where you can still afford a great home? And wouldn't it be nice if there were even fun stuff to do after work and on weekends? Yes, indeed.

Realtor.com set out to find these seductive strongholds where you can have it all. And we're not talking about the boonies: They zeroed in on metropolitan areas, which include cities and the surrounding suburbs.

The places that made their affordable safe harbor ranking are a mix of smaller metros that never really struggled with high crime, and cities once riddled with problems that have successfully pulled off a turnaround. Their list is concentrated on resurgent Midwest, Southern, and Rust Belt cities. No Western metros were included because home prices are simply too high.

They analyzed crime data provided by NeighborhoodScout, a website that tracks community data, focusing on America's 150 largest metros. Then, they eliminated those with high rates of violent or property crime, and with home prices above the (roughly) $300,000 national median. Next, they zeroed in on cities with great extracurricular's—running the gamut from nightlife, to kayaking, to great indie bookstores.

And the winners are:

Overview:  We had a week filled with Fed speak as we heard from Fed Chair Powell and several Governors and district Presidents as well as the Minutest form their last meet.  Overall, the tone was that they all still expected solid economic growth but are likely to pause for now as they wait to see how some geo-poplitical uncertainties unfold.

Inflation Nation: The December Consumer Price Index was bang-inline with market expectations with the Core (ex food and energy) YOY CPI remaining at 2.2%. The headline CPI YOY matched expectations of 1.9% which is a decline from November's pace of 2.2% but that decline was due to oil/fuel prices.

The Talking Fed:
We got the Minutes from the last FOMC meeting there really were not any surprises as we have heard from Powell and other Fed members several times since its release. There were a "few" that argued for leaving rates alone at the December meeting but obviously they were not voting members. Discussion centered on global concern and recognition that our own economy was solid but could face some headwinds from global and national geopolitical events as well as prolonged trade war. They expressed that their rate was close to if not at neutral and that they were solidly in the "data dependent" camp now.

Small Business Optimism: The December NFIB Small Business Optimism Index remains very high, coming in at 104.4 which is very close to November's reading of 104.8. Plans to increase employment rose 1 point to a net 23 percent, while a record 39 percent of small business owners reported job openings they could not fill in the current period, up 5 points from November.

Jobs, Jobs, Jobs: The November Job Openings and Labor Turnover Survey (JOLTS) showed that there were 6.888M unfilled jobs. The market was expecting 7.063M. October was revised upward from 7.079M to 7.131M. Once again, the trend continues of having more open positions vs those looking for work.