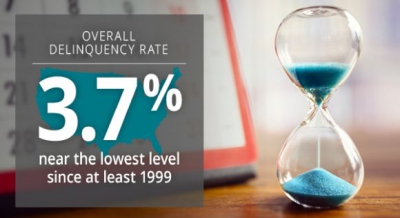 Mortgage loan performance remains good on a national level with overall delinquencies and foreclosures both declining.

The firm’s data shows that the overall delinquency rate (mortgages 30 or more days past due or in foreclosure) nationally in August was 3.7%, a 0.2 percentage point decrease year-over-year. This was the lowest rate for any August in at least the last 20 years.

The foreclosure inventory rate (mortgages at some stage of the foreclosure process) was down 0.1 percentage points to 0.4%. That tied the prior nine months as the lowest for any month since at least January 1999.

There was a decline in serious delinquencies (90+ days past due including loans in foreclosure), of 0.2 percentage points year-over-year to 1.3%.

“Delinquency rates are at 14-year lows, reflecting a decade of tight underwriting standards, the benefits of prolonged low interest rates and the improved balance sheets of many households across the country,” said Frank Martell, president and CEO of CoreLogic.

Overview: We had a week of very solid economic data with continued expansion in the Services sector (2/3 of our economy), Jobs and Consumer Sentiment.  All of which painted a good economic picture which pressured mortgage rates higher.  Rates also were responding to news, reports and tweets that trade negotiations with China were progressing which is also somewhat negative for rates.

Services:  The October ISM Non Manufacturing National PMI continued to show expansion with a reading of 54.7 , the market was expecting 53.5.  This marks a trend of expansion in the Services sector that began in 2009.

Jobs, Jobs, Jobs: The September Job Openings and Labor Turn Over Survey (JOLTS) once again showed over 7M unfilled jobs for the 18th straight month!  It came in at 7.024M vs est of 7.028M.  August was revised upward significantly from 7.051M to 7.301M.

The Talking Fed: New York Federal Reserve President John Williams said  that any changes in interest rates from here will depend on the incoming economic data but policymakers should be preemptive in taking steps to keep the expansion alive.