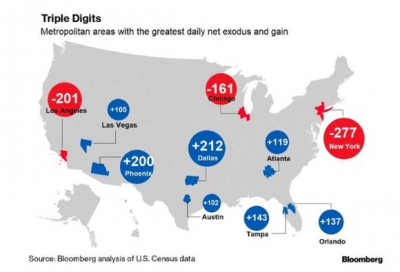 Bloomberg has completed an analysis of U.S. Census and other data and has determined that people are fleeing the New York City area in droves. New York City leads all US metro areas as the largest net loser with an estimated 277 people moving out of the area every single day. This is more than twice the 132 people who left the metropolis one year ago. Los Angeles and Chicago have also seen a triple digit net loss of 201 and 161 residents leaving in 2019, respectively.

These numbers were sourced from 2018 census data on migration flows to (and from) the largest 100 US metropolitan areas.

On the other side of the coin, cities like Dallas, Phoenix, Tampa, Orlando, Atlanta, Las Vegas and Austin all saw substantial inflows as a result of both domestic and international migration. Houston and Miami also saw enough inflows to rank them eighth and ninth, while Seattle rounded out the top 10 and was the only cold weather destination on the list.

Phoenix was the greatest beneficiary of domestic migration, passing Dallas and adding more than 62,000 residents between July 1, 2017 and July 1, 2018. Dallas saw an influx of 46,000 domestic migrants while Las Vegas, Tampa and Austin rounded out the top five.

Why is this important to housing?  Housing bubbles start in areas where demand slumps, causing prices to fall.  In the cities with net losses of residents, there is clearly less demand and those cities are the most likely to face a downturn in the housing market.

Overview:  We had another week of positive economic data with better than expected manufacturing data and a very strong consumer with high Consumer Confidence and strong Personal Income and Personal Spending data.  This would normally caused mortgage rates to rise but the strong economic data was offset by concern and uncertainty over the trade war and a fast approaching Fed meeting.

Consumer Confidence:  Another fantastic reading!  The block-buster July reading was revised even higher from 135.7 to 135.8 and the August reading beat out expectations (135.1 vs est of 130.0).

Personal Consumption: July Personal Income increased by 0.1% which at first glance looks a lot lighter than the consensus estimates of 0.3%.  However June was revised upward from 0.4% to 0.5% which is quite strong.  Personal Spending continues to show major strength with a monthly gain of 0.6%. The headline PCE YOY came in at 1.4% vs est of 1.3% and the closely watched Core PCE YOY data was tame at 1.6% vs est of 1.6%.

Manufacturing:  The Bell Weather Chicago PMI showed a big rebound from 44.4 in July to 50.4 in August and right back into expansionary territory.  The market was expecting a contractionary reading in the 47 range.

Taking it to the House: July Pending Home Sales Index fell by -2.5%, the market was expecting -0.3%. Weekly Mortgage Applications dropped by -6.2%,led by Refinances which plunged by -8.0%. The Case-Shiller 20 city metro Home Price Index showed a YOY gain of 2.1% in June.  The May pace was 2.4%.  The FHFA June Housing Price Index (takes into account every Fannie, Freddie and Ginnie mortgage) showed a national MOM gain of 0.2% which matched the pace in May.

GDP: The previously released 2nd QTR GDP was revised from 2.1% to 2.0% which is exactly what the market expected.